Why do people play games? What do they teach us? Children today play many of the same games as in the 19th century. This program takes a look at some of the different games and activities that young children played and participated in during previous centuries - games like Scandal, Graces, Ball & Cup, Blind Man's Bluff and many more. Students will have a chance to try their hand at some of these games during the program.

Many of the hobbies that people enjoy today are several centuries old and once were popular pastimes for women and children during the 19th century. Come and practice the arts of paper filigree, shellcraft and watercolor painting with us! This program can be tailored for different holidays. Be sure to check with the youth education coordinator if you want to request a seasonal spin to this program.

Campaign buttons can say a lot about someone running for political office United States presidential campaign buttons - both old and new - from the museum's - just ask your grandparents about "I like Ike!" In this hour-long program, students will learn about the impact of political imagery as they study teaching collection. Following a short lesson and discussion, the students will create their own campaign buttons. 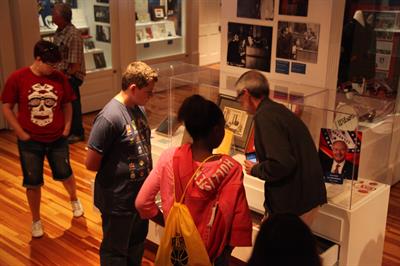 From "Gone with the Wind" to "Glory", epic films have tried for years to illustrate the harsh realities of Civil War life. Learn the day-to-day conditions that soldiers endured by examining their clothing, supplies and other interesting gadgets! Also discussed during this program are various women's topics including contributions made from the home-front, undercover espionage and the female soldier!

People are frequently fascinated by the clothing that women wore during the 1860s. While the country was experiencing upheaval, the magazines of the time were proclaiming the greatness of women's fashions.

Did every woman wear a hoop skirt during this time period? And did it really fly up over her head when she sat down? You'll find the answers to these questions and many other myths about women's clothing worn during Arkansas's Civil War era.