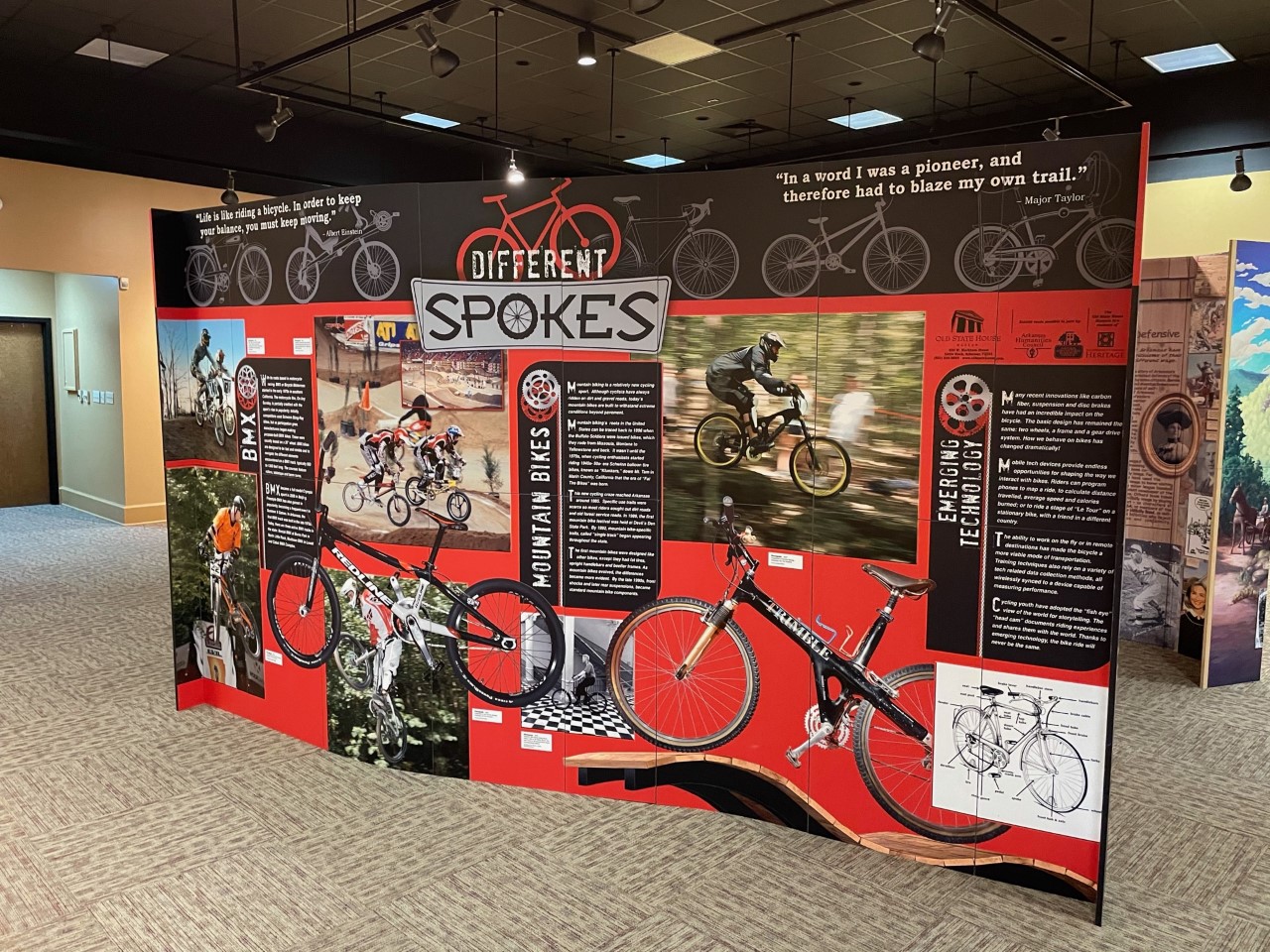 The Old State House Museum has a number of traveling exhibits available for loan to museums, libraries, and other institutions around the state. We pride ourselves on creating award-winning exhibits based on original research, and we want to share these experiences with as many people possible. The traveling versions of our exhibits have much of the same text graphics as the full exhibits at the museum.
Visitors to an Old State House Museum traveling exhibit will have an enriched experience similar to what they would receive at the museum. Unfortunately, due to security issues, we are unable to allow artifacts to accompany the traveling exhibits.

501.324.8645 Email Marie
The Arkansas Department of Correction traveling exhibit focuses on the state's prison system from 1838 to 2001 and features images from the Old State House Museum's Collection. The exhibit panels cover topics such as: Arkansas prisons, criminal activity, inmate life, security, and discipline and escapes.
This exhibit examines the myths and realities that gave rise to Arkansas's reputation as a backwards, lawless, isolated state populated by hillbillies, moonshiners, and bears. From the "The Arkansas Traveler" and "The Big Bear of Arkansas" to "The Beverly Hillbillies" and Dogpatch, USA, this exhibit enhances the understanding of the Natural State and its reputation--and misrepresentation--across the nation and around the world.
This exhibit explores the state's history of crime and punishment from pre-territorial days to the mid-1980s. The exhibit presents the criminal element, the officers of law enforcement, the colorful history of Arkansas's courts, and the seemingly endless quest to reform Arkansas's prison system.
The Arkansas Civil War Sesquicentennial Commission, in cooperation with the Old State House Museum and the Arkansas Humanities Council, now offers this exhibit about the state's involvement in the war. The ACWSC created the text and located the images for the exhibit. The Old State House Museum designed and built it. And the Arkansas Humanities Council handles booking and distribution.
The bicycle, and its evolution, is an important part of history. Whether considering it as a sport, a business, a necessary means of transportation, as leverage in the fight for women's equality and suffrage, as an art, or as a hobby-- the bicycle enjoys a special place in time.
Drawing on Arkansas politics explores Arkansas politics from the unique perspective of Arkansas's foremost political cartoonists, including George Fisher, Jon Kennedy, Roger Harvell, Tommy Durham, Vic Harville, and John Deering.
The Arkansas State Police traveling exhibit highlights the work of the Arkansas State Police from their creation in 1935 to the modernization of the force in the early 21st century. Featuring images from the Arkansas State Police Collection, the exhibit includes text panels on the creation and early growth of the Arkansas Rangers, the State Police's involvement in ridding Hot Springs of illegal gambling in the 1960s, and the new technology used in the 21st century.
In the late 19th century, the invention of moving pictures fascinated audiences all over the world. Movies soon become entwined with the American popular culture. Arkansans have been involved with the movie industry since the early days. Arkansas's cast of notables includes actors, writers, directors, cameraman, stuntmen, movie innovators, musicians, and producers. The state's scenery has played an equally prominent role in many films too. Take a look at some of these Arkansas notables and their contributions to stage, screen, and television.
"Fay Jones architecture begins in order and ends in mystery. His role can perhaps best be understood as a mediator, a human consciousness that has arisen from the Arkansas soil and scoured the cosmos, then spoken throughout the voices of stone and wood, glass and steel. Art, philosophy, craft, and human aspiration coalesce in his masterworks, transformed from acts of will into harmonies: Jones lets space sing." So writes Robert Adams Ivy, Jr. in the exhibit essay, a magnificent retrospective of the life and work of the disciple of Frank Lloyd Wright. "Outside the Pale" was on exhibit between June 1999 and May 2000 and served as the basis for a book by the University of Arkansas Press. The exhibit is now available in a condensed form for use by schools, libraries, and local museums throughout Arkansas. Fay Jones died on August 31, 2004. Specifications: Contained with six crates, Minimum requirement of 960 square feet of exhibition space, Includes 3 double-sided panels that are arranged by topic: (1) Intro, History, Photograph of Fay Jones, (2) Design, and (3) Organic