Delta Cultural Center has interpreted the region’s history through exhibits, educational programs, annual events, and tours for more than two decades from its vantage point in downtown Helena-West Helena. And King Biscuit Time, a local radio show with an amazing history of its own, plays an important role in the museum’s efforts to highlight blues music in Delta cultural heritage.

The DCC began presenting Helena radio station KFFA’s King Biscuit Time from the Depot at 95 Missouri St. in 1992; when the Visitors Center opened in 2000, King Biscuit Time began broadcasting from a custom studio established in the new Delta Sounds Gallery each weekday at 12:15 p.m. with legendary host “Sunshine” Sonny Payne. 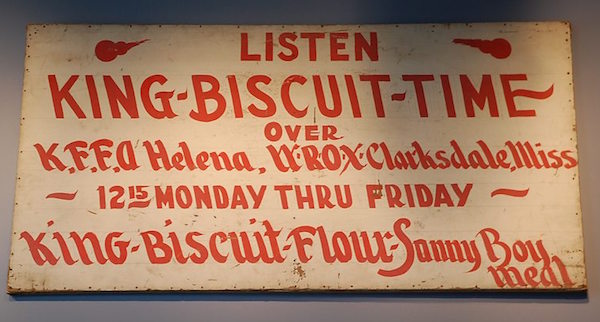 When KFFA first hit the airwaves in 1941, a teenager named Sonny Payne was already pushing the broom at the new business; soon he was cleaning records and occasionally being heard on the air. World War II interrupted Payne’s radio career, as did the lure of the Chicago music scene after his discharge from the U.S. Army. Despite a promising career as a jazz bassist, the call of home drew Payne back to the Delta and back to KFFA where Anderson made him host of King Biscuit Time in 1951. Payne has remained a part of KFFA and the blues music scene of the Delta for more than six decades.

In 1992, King Biscuit Time was awarded the prestigious George Foster Peabody Award, recognizing outstanding achievement in the field of radio and broadcast media.

In 2010, Payne was inducted into the Blues Foundation Hall of Fame in ceremonies at Memphis that also welcomed Charlie Musselwhite, Bonnie Raitt, Lonnie Brooks, Peter Guralnick, and pioneers W.C. Handy, Amos Milburn, and Gus Cannon. Payne has received numerous awards and accolades, including the Blues Foundation’s “Keeping the Blues Alive” Award for lifetime service, the Arkansas Broadcasters Association Pioneer Award, and the Arkansas Museums Association Volunteer of the Year Award. He was inducted into the Arkansas Tourism Hall of Fame in 2003. In 2014, Governor Mike Beebe declared May 13 to be “Sunshine” Sonny Payne Day and in 2015 he received the Cecil Scaife Visionary Award.

Payne hosted the show until his death in February 2018. The show continues to be delivered to audiences by Thomas Jacques, Assistant Director of the Delta Cultural Center.