One of the most beautiful antebellum homes in Arkansas, Trapnall Hall, located at 423 E. Capitol Ave. in Little Rock, is managed by the Old State House Museum and is an ideal setting for business meetings, luncheons, dinners, weddings, receptions, corporate celebrations, reunions, parties and much more.

Trapnall Hall, constructed in 1843 in the Greek Revival style of architecture, was once the home of Frederic and Martha Trapnall. The home’s architect is unknown, but it was one of the few brick houses in Little Rock at the time it was built.

The Trapnalls settled in Little Rock in the late 1830s from Kentucky. Trapnall, a lawyer and merchant, served in the Arkansas legislature for several sessions.

Campaigning for Congress in 1853, Frederic fell ill and died, but his widow lived in the home until her death in 1861. Upon the death of the Trapnalls’ only surviving child in 1863, Frederic’s brothers became heirs to the Trapnall properties. The Trapnalls are buried in Mt. Holly Cemetery in Little Rock.

The home went through a succession of owners and uses after passing out of the Trapnall family. To prevent the home from being torn down, Mrs. Charles Minor (Julia) Taylor purchased it in 1929 and donated it to the Junior League of Little Rock as a memorial to her late husband. In 1963, the Junior League sponsored a major restoration of Trapnall Hall, which was returned to its original splendor by the Cromwell Architecture Firm. It was one of the first homes in the area to be restored. After serving for many years as headquarters for the Junior League, in 1976 the league donated half of the appraised value of Trapnall Hall to the state. Today, Trapnall Hall stands as the official receiving hall for the state’s governor, and can be rented by the public for special events.

Make your wedding, anniversary or other event Something Special Someplace Special.
Trapnall Hall is a lovely and classic venue that can accommodate indoor and outdoor weddings or receptions.

Trapnall Hall has a beautiful and spacious bride’s room. Brides who wed at Trapnall Hall may take portraits there free of charge during regular business hours. There is a small fee for those who wish to use Trapnall Hall for portraits only.

The South Parlor of Trapnall Hall features a beautiful grand piano. Because Trapnall Hall is an historic property, the floor cannot support dancing, but small musical groups are welcome. Alcohol may be served for two hours. Please inquire for our extensive list of approved caterers.

Since Trapnall Hall can hold 75 to 125 people inside, and even more for front porch or lawn ceremonies, you can feel comfortable knowing that inviting all of your loved ones won't be a problem. If your ceremony is smaller, our enchanting garden makes the perfect setting! Our rates are very reasonable, and our accommodations are ample. 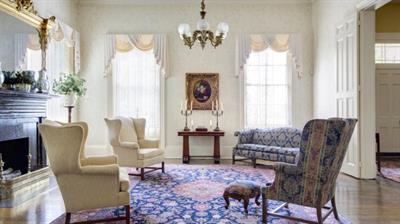 We provide everything you'll need for a wonderful time, including: plates, punch cups, wine and bar glasses, flatware, silver serving pieces, chairs for use inside the building, a baby grand piano and security for night events. Alcohol may be served for two hours, and be sure to ask about our extensive list of approved caterers. Trapnall Hall has a large parking lot and is within walking distance of several downtown hotels and the River Market.

Welcome to Trapnall Hall. We are excited to help you have a wonderful event. Having helped many brides, party planners and meeting planners in the past; we have learned some things that make everything run smoother. The rental policies below are meant to help make every aspect of the special day go as planned. 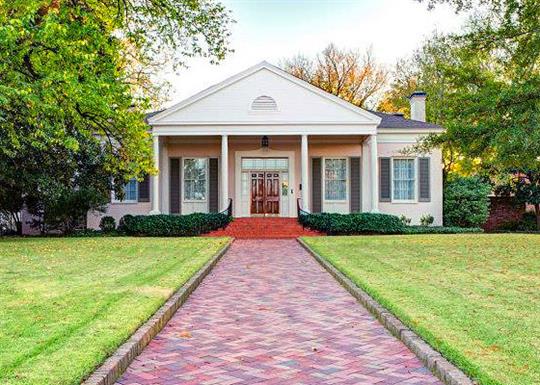 “The venue was stunning. The atmosphere was welcoming and classic. The furnishings were elegant, charming, and very comfortable. Having a baby grand piano allowed us to set just the mood we desired, with flowing music greeting our guests as they ascended the lovely brick steps.” - K.S.