Sometimes, identifying certain plant species can be intimidating even for those of us supposed plant “experts” called botanists. Despite there not being a particularly large number of species, ladies’-tresses orchids, members of the genus Spiranthes, can be difficult to identify, even though they are probably some of the most widespread and easily recognized orchids in the state, with their spiraling arrays of primarily white or whitish flowers. Some even occasionally pop up in yards! Others are highly restricted to specific natural habitats. However, differences between the individual species and varieties within the group are sometimes subtle and defining characters can be minute, requiring high-powered microscopes to see. Add to this the fact that members of the group often crossbreed, producing a variety of hybrids, some of which have even led to new species. These hybrids or species of hybrid origin may have varying degrees of intermediacy, or they may have unique characters, different from their parents. I, for one, have found ladies’-tresses challenging and have also found myself avoiding them a bit, both in the field and in the herbarium.

Although I was certainly made aware of Pace and Cameron’s paper and the new species of ladies’-tresses in the state, I didn’t really “look into it” much. I was occupied with other work and projects, and somewhat reluctant to get mired in the difficult group, which now included yet another cryptic species. My avoidance, however, recently lapsed while reviewing a specimen donated to the ANHC Herbarium. Virginia McDaniel, a forestry technician and ecologist with the U.S. Forest Service’s Southern Research Station, had donated to us a large set of specimens she had collected during plant inventory and research work on Forest Service lands. In the set was a ladies’-tresses specimen she had collected at the Crossett Experimental Forest in Ashley County in Southeast Arkansas. It had been identified as nodding ladies’-tresses, which seemed correct to me, but I decided to go ahead and run it through an updated dichotomous key. Used by biologists, a dichotomous key is a series of two-option choices of characteristics or suites of characteristics that lead to the correct name of a species. The updated key contained some of the newer species recently described within the eastern U.S., such as Niklas’ ladies’-tresses. To my surprise, the specimen keyed to Niklas’ ladies’-tresses rather than nodding ladies’-tresses.

One defining character that separates Niklas’ ladies’-tresses from nodding ladies’-tresses is the presence of tiny bumps or bump-like hairs, called papillae, on the central vein of the upper surface of the labellum or lip (the central, lower, and usually larger petal of an orchid flower; plural: labella). Prior to this, I hadn’t really been sure I could confidently see or recognize the papillae, and after the plants are pressed and dried to make herbarium specimens it is sometimes difficult to see the inner and upper surfaces of the labella. Not to mention, after drying, the petal tissues can shrivel and crinkle in ways that make it hard to identify bumps or hairs that might have been more evident when the flowers were fresh. Fortunately, though, this was not the case with McDaniel’s specimen. Another character of Niklas’ ladies’-tresses noted by Pace and Cameron is that the long, narrow basal leaves are usually withered by the time the flowers open, which differs from nodding ladies’-tresses. McDaniel’s specimen also exhibited this character, lacking all but one dried up remnant of a portion of a leaf. This specimen record expands the known range of this newly recognized species well into the West Gulf Coastal Plain and indicates that it could potentially be found in other surrounding states.

More study is certainly warranted to fully elucidate the two species’ distribution and abundance within the state, but hopefully we now have a little better understanding of Arkansas’s ladies’-tresses. Or at least, hopefully, maybe I do…unless I’ve been lulled into a false sense of confidence. Either way, it was an interesting foray! 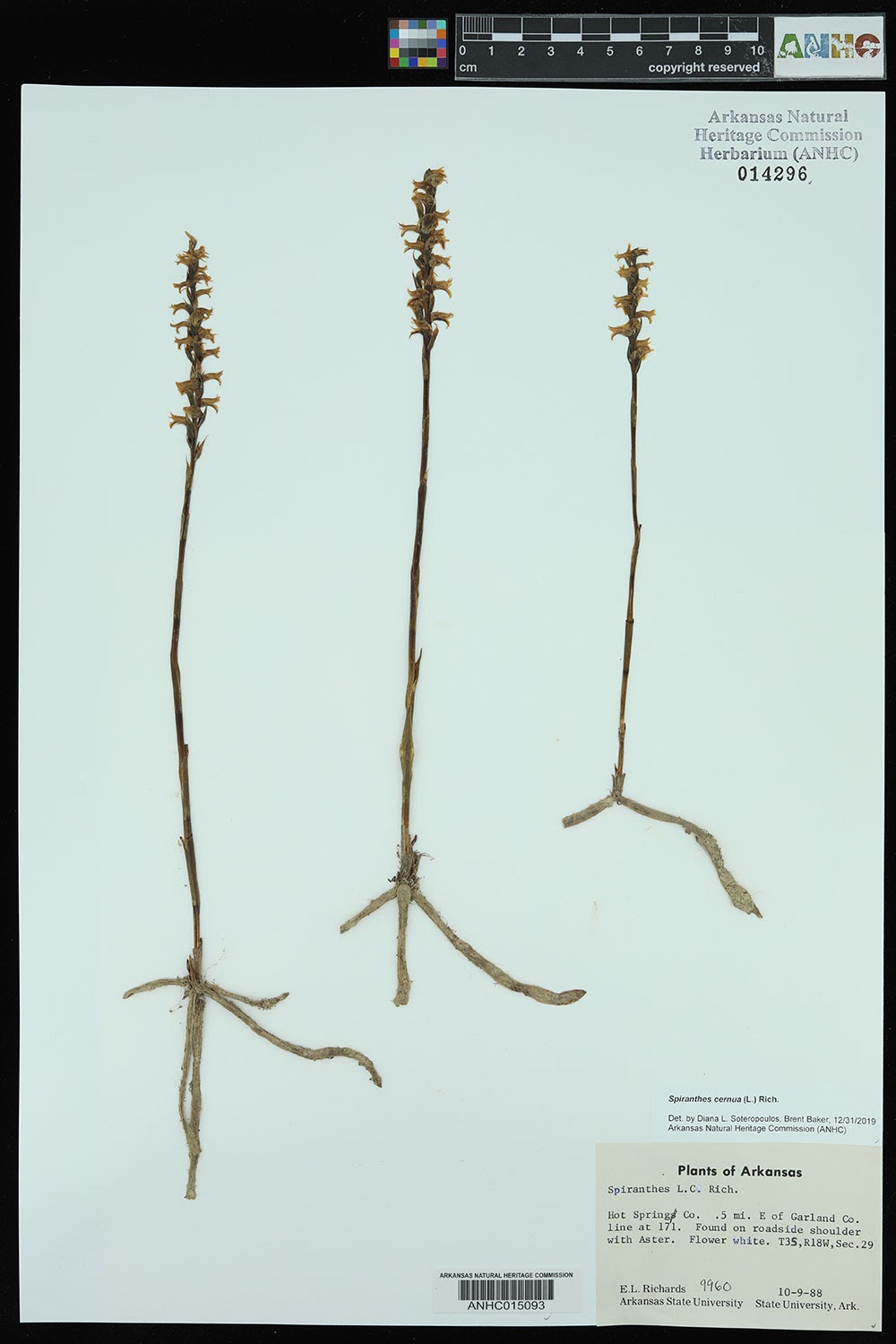