Explore the history of Arkansas’s most famous weapon, the Bowie knife, as well as the history and art of bladesmithing. This gallery includes both historical and modern knives and is the home of the American Bladesmith Society Hall of Fame.

Arkansas Made: History of the Bowie Knife

Learn about the 175-year history of the Bowie knife or Arkansas Toothpick, Arkansas's most famous weapon. The story of Jim Bowie, as well as the history and art of bladesmithing are told in the museum's Knife Gallery.

The exhibit includes more than 100 historical and modern knives and is the official exhibit for the American Bladesmith Society. The knives are from the museum's permanent collection and on loan from knife makers and collectors. Representing the work of master craftspeople who created exquisite weapons, the knives are made with precious metals, gemstones, damascus steel, and intricate designs.

Arkansas was on the edge of the United States in the 1830s, and when Americans thought of a "rough and tumble" place where people might even pick their teeth with big knives, they thought of Arkansas. Washington, Arkansas, was the home of James Black, a blacksmith who became well known for the knives he made. Black's knives were copied by cutlers in Sheffield, England, and sold in America as the "Arkansas Toothpick." As early as 1835, the "Arkansas Toothpick" and the "Bowie Knife" were tied together as two terms used for the knives that were then popular. 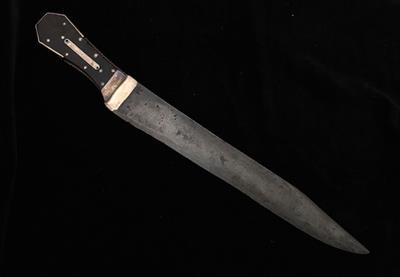 A Knife for Jim Bowie

Jim Bowie became known for his ability to fight with knives after the "Sandbar Duel" in Mississippi in 1827. In this fight he used a knife which was given to him by his brother. According to many sources, James Black made a knife for Jim Bowie. Some people called this the first bowie knife, the first knife actually made for Jim Bowie. By the time Jim Bowie died at the Alamo in 1836, the term Bowie knife was established as the name for the knives popular at the time.

The Historic Arkansas Museum acquired Bowie No. 1 several years ago through an auction of the collections of two prominent Texas knife collectors. Bowie No.1 is a knife well known in collecting circles as an important early bowie knife.

Although James Black did not put a maker's mark on his knives, curatorial analysis has determined that Bowie No. 1 was made by James Black.

Compare the Carrigan Knife, with an ownership history going straight back to James Black, and Bowie No.1. Was this the legendary knife that James Black made for Jim Bowie?

Historic knives show the variety of shapes and sizes of knives used in the South during the antebellum period for "defensive purposes." The Civil War became the last hurrah for the bowie knife, as Confederate soldiers, especially, armed themselves for battle. As the war progressed the knife proved of less value than rifles, bayonets, revolvers and the bowie knife lost its status as an important southern icon.

In the 1950s the bowie knife witnessed something of a revival, as Davy Crockett and Jim Bowie were featured in books and movies. A poster from the Alan Ladd movie Iron Mistress is featured in this section of the exhibit.

The American Bladesmith Society (ABS) represents another aspect of the revival of interest in the bowie knife, as artisans preserve the art of the forged blade. The ABS Hall of Fame is a part of the museum's Knife Gallery, and the work of ABS bladesmiths is on display.