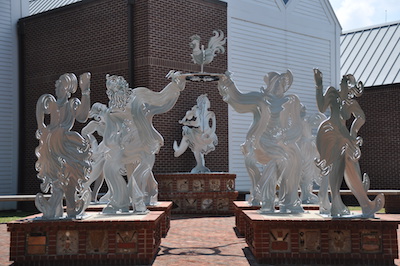 Historic Arkansas Museum's sculpture, pARTy for Peg by Alice Guffey Miller, is Arkansas-made history, given and gathered from all 75 counties. It's a community collective of shared memories built on a legacy of living and giving. This History Hoe Down is full of dancing, dreaming, laughing and loving, a lively tribute to a true Arkansas spirit, Peg Newton Smith.

That’s one of the first questions people ask about our sculpture, pARTy for Peg. Peg is Peg Newton Smith, a longtime museum friend, volunteer and commissioner. In 1941, she volunteered—in costume—on the museum’s opening day. Thus began her lifelong commitment to Historic Arkansas Museum, then called the Arkansas Territorial Capitol Restoration. Every discussion about Historic Arkansas Museum and Arkansas art will eventually lead to mention of the late Peg Newton Smith. It was her brainchild for the museum to have a separate gallery devoted to contemporary Arkansas artists. She also helped found the Museum Store, filled with Arkansas crafts. We can’t say enough about how Peg helped shape who we are today. She had a sharp memory, a pure love and commitment to history and was a resource for us all as we tried to uncover the interesting minutia hidden within the fabric of Arkansas history. Peg also had a pure love for Arkansas artists and artisans, and she understood that an institution like Historic Arkansas Museum could offer significant support to the artist community in the state. By now, hundreds of contemporary Arkansas artists have exhibited their work at the museum. This is a rich legacy we would not think of abandoning. pARTy for Peg is not a portrait of our dear friend—it is a sculpture inspired by her spirit. And what better way to capture that spirit than to commission an Arkansas artist to create it?

Two of Arkansas's most historically important artists, Louis Freund (1905 - 1999) and Elsie Freund (1912 - 2001), were among the first to exhibit in Historic Arkansas Museum's Gallery for Arkansas Artists, a contemporary gallery conceived by Peg Smith. The Freunds also became Peg's close friends. Louis and Elsie each created variations on an iconic Arkansas art form, the square dance. The museum presented these paintings to artist Alice Guffey Miller as jumping-off points for her creation.

The fiddler, named Arkansassy by the artist, and her square dancers were all cut from ½” aluminum at SeaArk Boats, a family-owned Arkansas company. Staff at SeaArk participated in many aspects of the fabrication, which went perfectly with the museum’s commitment to Arkansas Made. All of the figures come to life in a spirited dance as visitors are invited to walk (or dance!) among them.

In a way that is quintessentially her own, artist Alice Guffey Miller involved all sectors of Arkansas’s vast community. Alice invited Arkansans to provide objects—a rock, horseshoe, brick from a bygone building—to embed in the sculpture’s pedestals, hoping to get objects from each of Arkansas’s 75 counties—which she did! Each object tells a story—of a town, community or person. 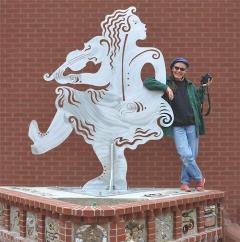 Alice Guffey Miller has lived in Arkansas since 1974, currently residing on several wooded acres in Monticello, Arkansas—a place she and her late husband and collaborator Mars Hall named Rising Oaks. A hallmark of Alice’s work is community involvement and she has produced public art all over the state. Her art is often whimsical and always lively, a great match for our honoree, Peg Newton Smith.

Alice comes from a family active in the arts and politics, going back several generations. Her mother Nancy Miller was a longtime docent at the Carnegie Museum and her father Cal Miller was a professional photographer.

Mars Hall often co-collaborated in Alice’s work, providing the words that fill in the concepts of her work. Mars was a professor of communications at the University of Arkansas at Monticello; and he and his students were involved in several aspects of the creation of pARTy for Peg. In particular, Mars wrote the words that Alice inscribed in the bases of the aluminum figures and also wrote a square dance patter call for the project, called “Peg’s Patter Call.”