ON THE FIELDS AND IN THE TRENCHES: RELICS OF THE FIRST WORLD WAR

Currently on display at the Arkansas State Archives in Little Rock is "On the Fields and In the Trenches: Relics of the First World War." In honor of the centennial of World War I, this exhibit explores the United States' involvement in the First World War in Europe through an array of historic artifacts, documents and photographs.

The Arkansas State Archives has a large collection of artifacts related to the First World War, which were acquired in the early 20th century for a Great War Museum at the Arkansas State Capitol. Many of these historical items were picked up off the battlefields by Louis C. Gulley, an Arkansan working as a postmaster for the American Expeditionary Forces in Europe during the war. Items on display include historical artifacts used and made by Arkansans, Allied troops and soldiers from the Central Powers, such as Germany and the Austro-Hungarian Empire. Various helmets and gear, along with firearms, trench knives, a German potato masher hand grenade, a gas mask and items torn apart by shrapnel illustrate the brutality of the war.

An operation cap, mask, bandages and a hospital sock are among the exhibited items made by Arkansans for the American Red Cross. Included in the display are trench art pieces carved and hammered out of wood, bones and ammunition shells by soldiers on the front lines and in prisons. Uniforms, helmets, equipment, dog tags, insignias and medals highlight the personal stories of Arkansans, including the medals of Herman Davis, an Arkansan who Gen. John J. Pershing listed as the fourth greatest heroes of World War I. The exhibit also examines how the introduction of new fighting techniques, such as tanks, airplanes and chemical warfare, set the stage for a new kind of modern war.

The Arkansas State Archives offers several traveling exhibits that are displayed at museums, libraries, archives, schools, historical societies and other educational or cultural institutions around the state at no cost. These banner-style exhibits must be booked in advance as well as picked up and dropped off at the Arkansas State Archives in Little Rock. Each banner pulls out of a stand on the floor like a window shade and stays extended with a metal pole which latches to the top and base. Since each banner stands alone, the exhibit panels can be arranged in many configurations, whether linearly, at angles, back to back or in triangular or square groupings.

"Territorial Arkansas: The Wild Western Frontier" explores the history of Arkansas Territory through the collections of the Arkansas State Archives. Established in 1819, Arkansas Territory was a wild frontier on the western edge of the United States, where politicians settled debates by deadly duels. The sparsely populated land saw an influx of settlers arriving over land and rivers to establish small communities and isolated homesteads, develop territorial and county governments, farm the land and start new businesses. Initially, Arkansas Territory included what is now Oklahoma, but through changes in boundary lines and the relocation of Native Americans further and further west, the territory’s land was reduced to its present size in 1828. After 17 years as a territory, Arkansas was admitted to the Union as the 25th state on June 15, 1836. 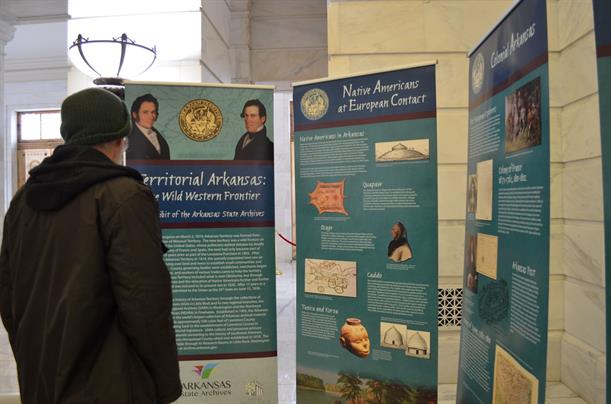 This exhibit consists of 15 banners stands. The extended banner stands on display are each 38"W x 86"H x 8.6"D. The banner stands in their individual cases for transport are each 40"L x 10"H x 5"D.

THE GREAT WAR: ARKANSAS IN WORLD WAR I

"The Great War: Arkansas in World War I" showcases images from the Arkansas State Archives' holdings, including original documents, photographs, posters, maps and historical objects that tell the story of Arkansas's role during World War I, at home and on the battlefields. The panels cover the chronology of the war as well as various facets of the conflict: training troops in Arkansas, actions overseas, the Home Front, providing for the war, healthcare and Arkansas heroes.

This exhibit consists of 12 banner stands. The extended banner stands on display are each 85" H x 37.5" W x 8" D. The banner stands in their individual cases for transport are each 39.5" L x 8.5” W x 3.5" H. A free standing literature stand/table is also available for this exhibit.

The Arkansas State Archives' traveling exhibit, "Fought in earnest: Civil War Arkansas," chronicles major historical events in Arkansas between 1861 and 1865, in addition to the circumstances leading up to war. Images from Arkansas State Archives holdings, including original documents, photographs, maps, drawings, paintings and artifacts, illustrate the story of the Civil War in Arkansas. These primary source materials offer a first-hand look at the lives of Confederate and Union soldiers, government officials and civilians in Arkansas during this tumultuous time. 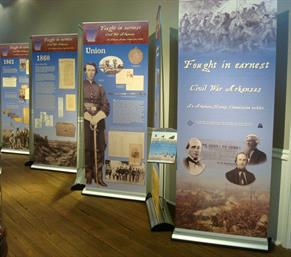 This traveling exhibit, produced by the Arkansas State Archives and The Black History Commission of Arkansas, tells the story of the 85 African Americans who served in the Arkansas General Assembly in the 19th century. After the Civil War, Arkansas adopted a new constitution in 1868, and its provisions included giving black males the right to vote and hold public office. African American lawyers, merchants, ministers, educators, farmers and other professionals served in the Arkansas General Assembly. Photographs of f46 of the 85 legislators are an integral part of this exhibit’s display. Also featured is a complete listing of the legislators and a short history of post-Civil War and election law “reforms” that effectively ended African Americans’ election to legislative positions until the 1970s. 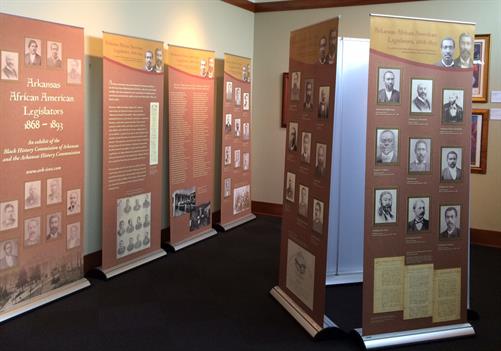 This exhibit consists of eight banner stands. The extended banner stands on display are each 87 ¼” H x 35 ¼” W x 10” D. The collapsed banner stands in their individual cases for transport are each 37 ½”L x 11 ¼” W x 4”D. A literature stand that attaches to the base of the first banner stand is available for this exhibit. Plastic rulers listing the African Americans who served in the Arkansas State Legislators between 1868 and 1893 are also available at no cost to educators.

The Arkansas State Archives has partnered with Google Arts and Culture to create the following online exhibits.

This photographic exhibit illustrates the story of a small black farming community in Grady, Arkansas, in the late 1930s.

ARKANSAS IN THE GREAT WAR, PART I: MOBILIZING THE STATE FOR WAR

Part one of Arkansas in the Great War examines Arkansas's progressive and industrial status on the eve of war and how Arkansans pulled together to prepare for the time ahead.

ARKANSAS IN THE GREAT WAR, PART II: THE WAR AT HOME

Part two of Arkansas in the Great War explores what it was like for average Arkansans, being asked to make economic sacrifices at home in order to support the war effort as well as how the Arkansas Council of Defense endeavored to reach out to women and African Americans to enlist them in the war effort.

ARKANSAS IN THE GREAT WAR, PART III: IN THE TRENCHES 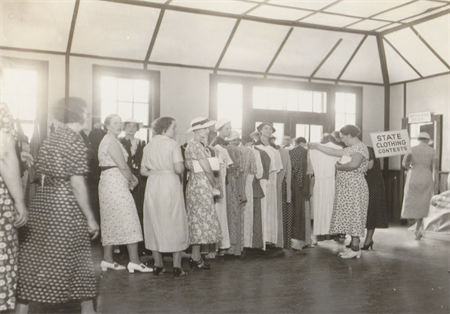