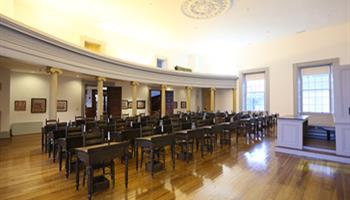 In 1885, the north façade of the State House was extended 70 feet towards the Arkansas River to create a larger House Chamber; the original House Chamber then served as the Senate Chamber until 1911, when state government moved into the current State Capitol. During the 1885 renovation, efforts were made to modernize interior spaces along Victorian lines.

When the State House became a museum in the early 1950s, every effort was made to restore it to its 1885 Victorian appearance. As a result, there were no antebellum spaces in the interior for more than 100 years. When the site underwent restoration in the late 1990s, the original House of Representatives Chamber was returned to its likely appearance during the 1840s. The room contains wooden desks, chairs, and spittoons. The gallery is further interpreted by a video of famous political scenes and events that occurred during the 75 years that the Old State House served as Arkansas's seat of government.