By Victoria Chandler, Arkansas Made Researcher

For the 2nd History is Served dinner of 2018, guests were treated to a night all about the French and Spanish colonists of Arkansas. Part of the evening included a pop-up exhibit that featured “examples” of what a table scene would have looked like at the Arkansas’s colonial capital – Arkansas Post.

Perrin du Lac visited the Post in 1802 and remarked: “The habitants, almost all originally emigrants from Canada, are hunters by profession, and grow only corn for the nourishment of their horse and of a small number of cattle used in plowing. More than half the year one finds in this village only women, children, and old people . The men go to hunt deer, the skins of which are less valued than those from the northern country, buffalo which they salt for their own use, and some beaver which they still find at a distance. On their return, they pass their time playing games, dancing, drinking, or doing nothing, similar in this as in other things to savage peoples with whom they pass the greater part of their lives, and whose habits and customs they acquire.” While du Lac painted quite a poor picture of the Post’s habitants, the military officers and Commandants stationed at Arkansas Post were starkly opposite in character. Many of these high-ranking families came directly from France or Louisiana. They traveled frequently up and down the Mississippi River for entertainment, schooling, and marriages in New Orleans, and continued to “keep up” with society while at the Post.

The “tablescapes” represented a mock-up of a meal at the Commandant’s poteaux en terre or pieux en terre house and a tavern at the Post. While none of the objects displayed originated at Arkansas Post, they were selected based on ceramic sherds found at archaeological digs in and around the Post. 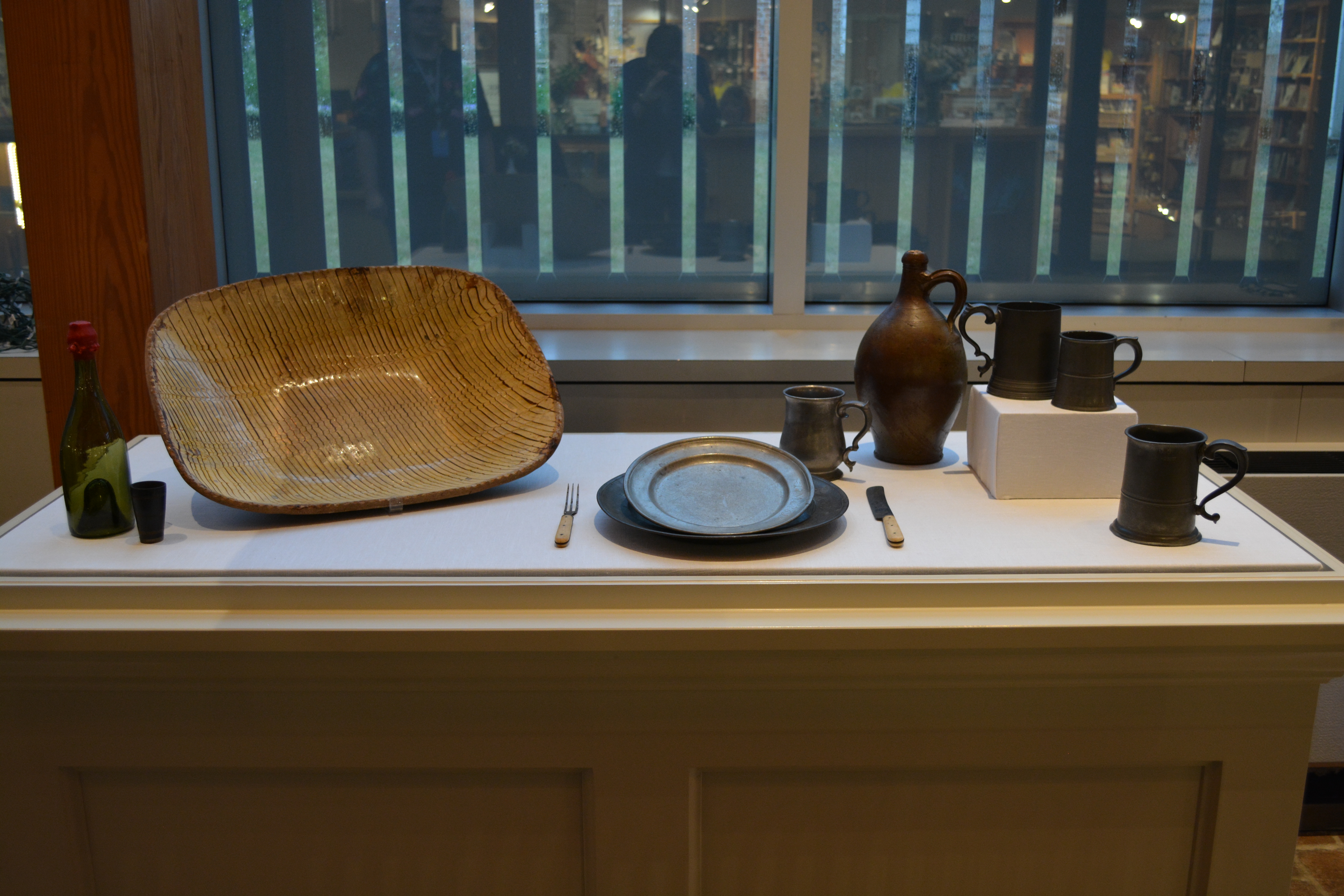 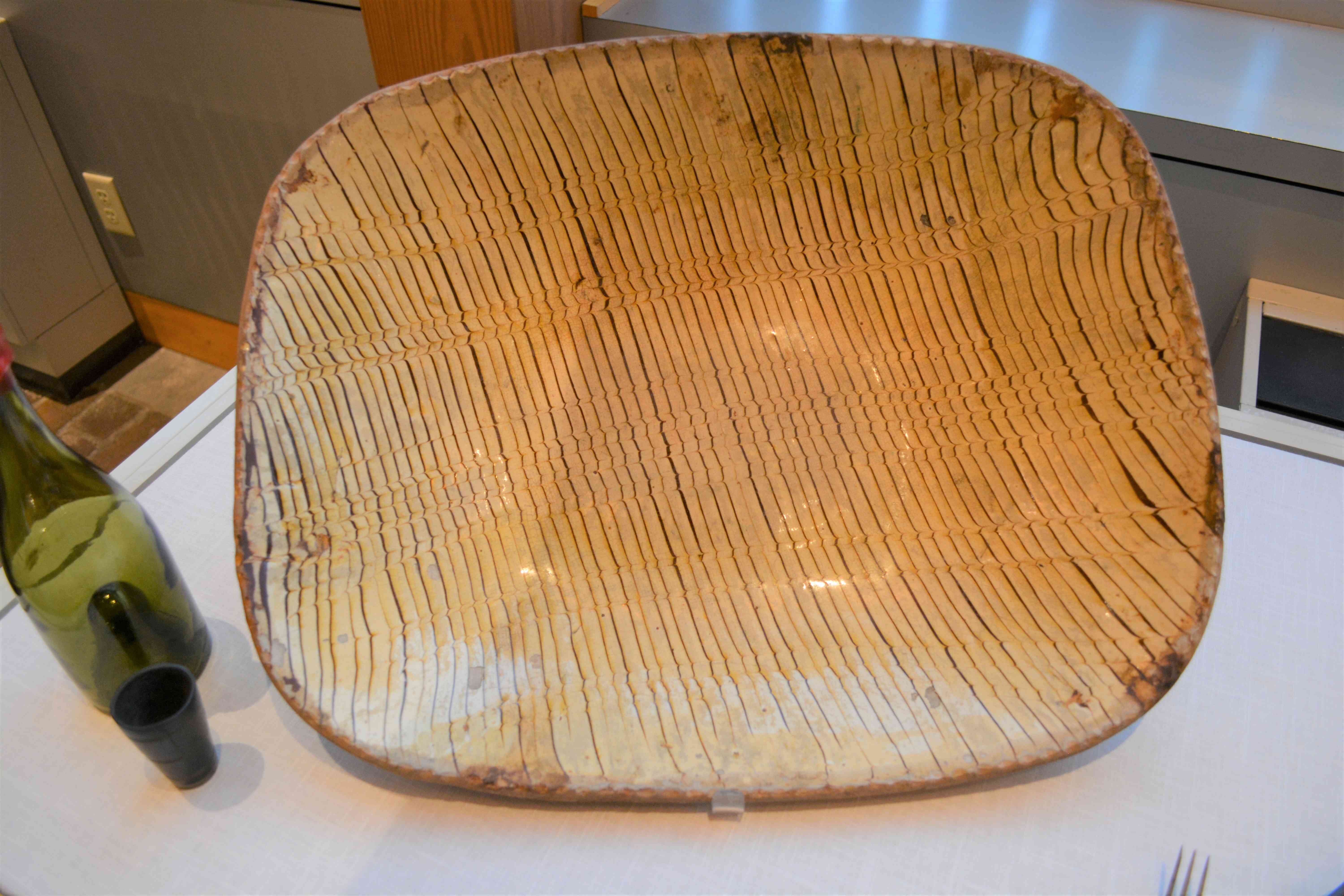 This assemblage of tableware is representative of furnishings from a habitant’s table at the Arkansas Post. Durable pewter plates and tankards, a bone handle knife and fork, all the accouterments for a tavern meal are present. The use of stoneware jugs, like the brown example here, was prevalent from the earliest days of European settlement, used for everything from water to alcohols. The beautiful earthenware serving tray, which stands out dramatically among the other utilitarian wares, dates from 1720-1780 and features a dark brown trailed and combed slip decoration on a cream slip background to create the “feather” or “marbled” glaze. 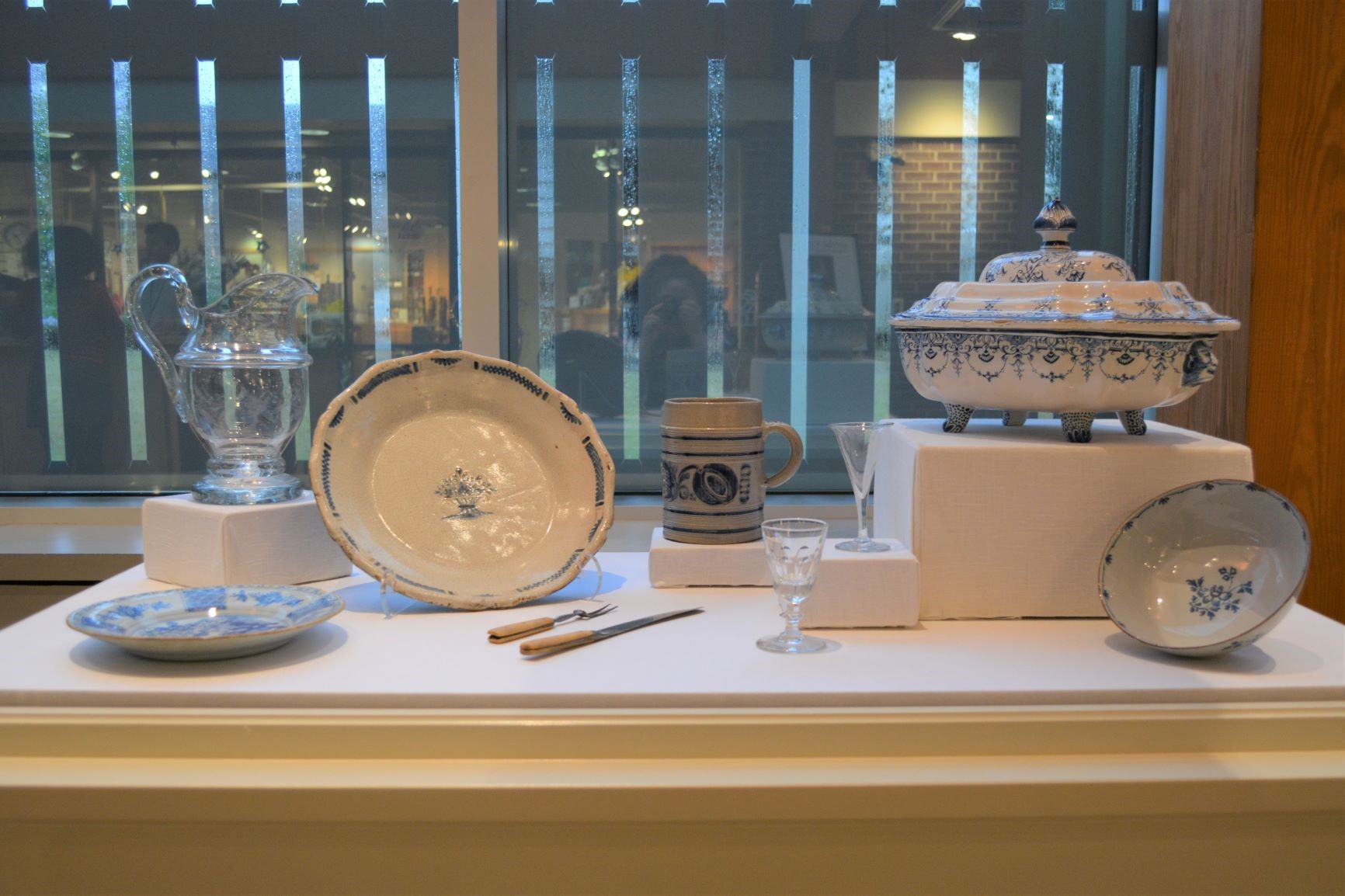 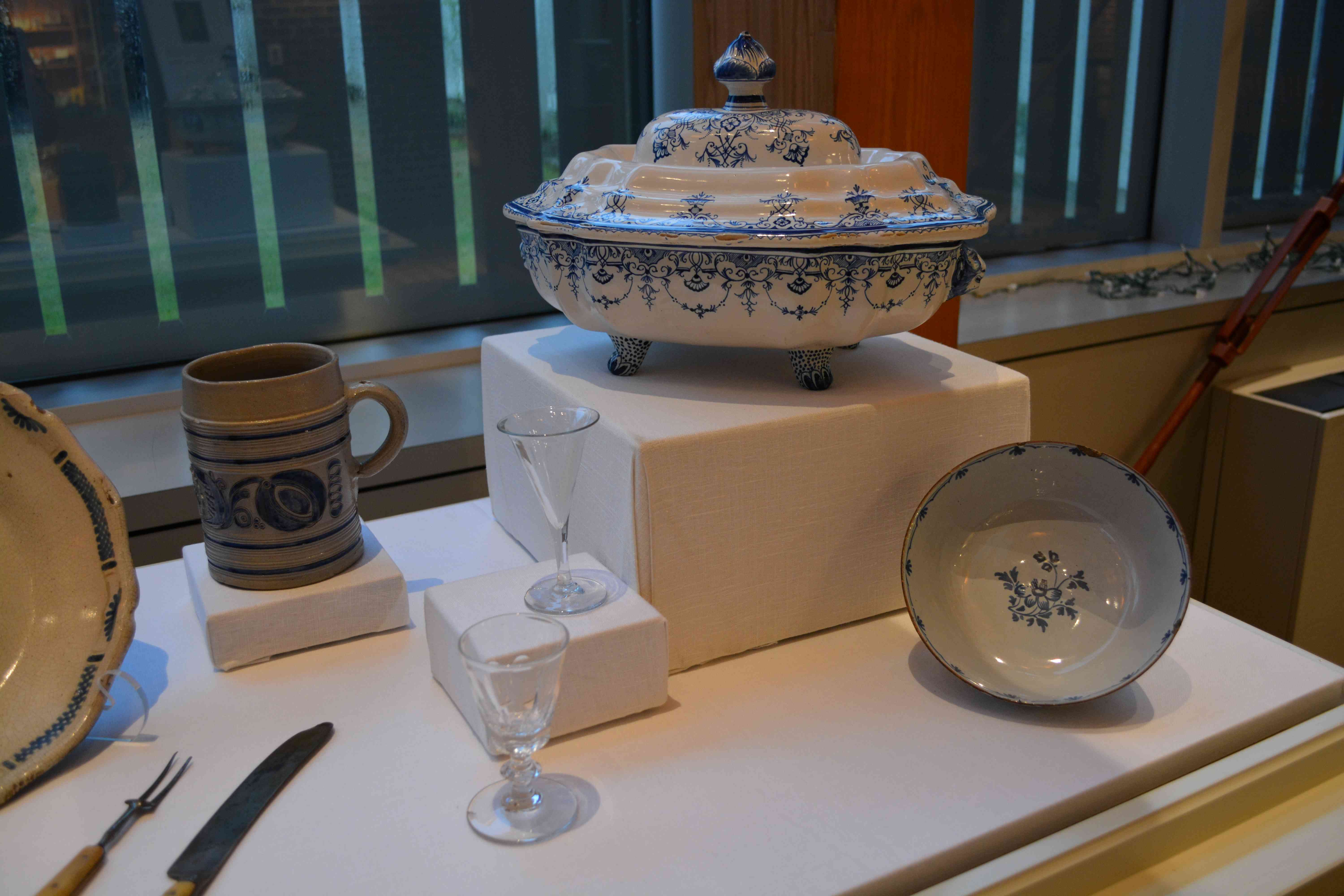 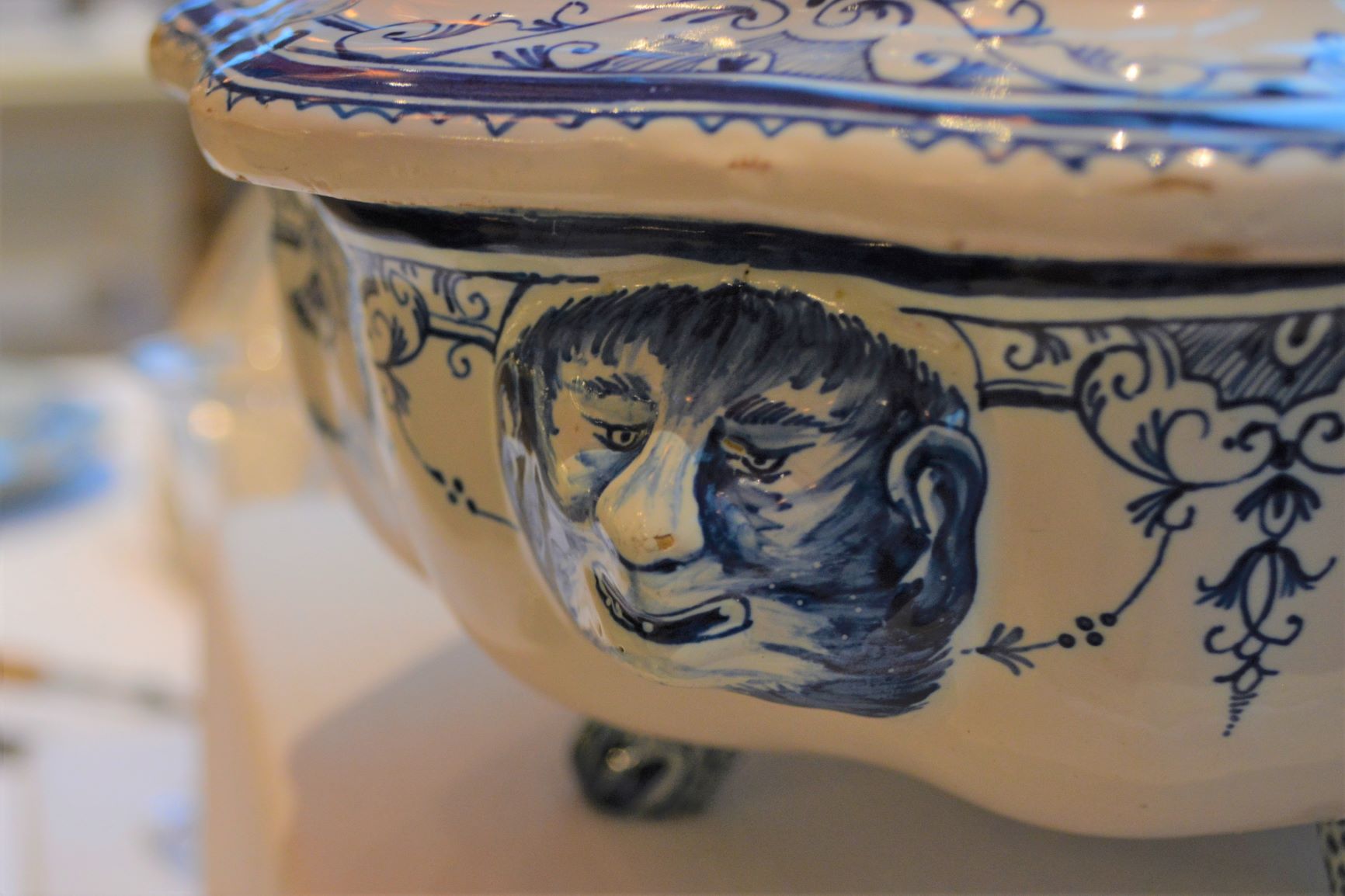 By false regard, tongue glad to eat, mouth too gluttonous prone to deceit As much in talk as well in meat Our poor soul, so vile and vulgar, reason’s course doth run asunder. - Jean-RobertPitte,Gastronomie francaise: Histoire et geographie d’une passion (Paris: Fayard, 1991), 66.

These elegant dishes represent the myriad of wares used for dinner service at the table of a wealthy Arkansas Post citizen, such as the Commandant. Blue and white pottery, widely used in Chinese porcelain since the 14th century, became extensively imitated by Europeans in the 1700s. Many of the pieces here came from the Netherlands and France, making their way from the Old World, across the Atlantic, and through New Orleans, before finding their place at remote towns like the Post.

Of particular grandeur is the French faience tureen, used for soups and stews. Molded with lion mask handles and raised on four feet with a dot and foliate design, with stylized foliage, strapwork and hatched designs border the dish, and is topped with a fruit form knop on the dome of the lid.