At Age 17, ANHC Herbarium Has Accessioned Over 15,000 Specimens

The ANHC Herbarium was founded in 2003 and officially recognized by the international Index Herbariorum (IH) in 2010 when it had totaled 5,000 accessioned botanical specimens. The IH describes the ANHC Herbarium collection as:

ANHC Botanist/Arkansas Herbarium Digitization Coordinator, Diana Soteropoulos, recently created a summary map of the number of herbarium specimens accessioned per Arkansas county for the ANHC Herbarium. The summary map and the data used to create it gives us a closer look at what specimens make up our herbarium, including where in the state they were collected from, species diversity of the specimens, and age of the oldest specimen.

The ANHC herbarium has 15,689 accessioned specimens and probably almost as many specimens waiting to be accessioned (the American Museum of Natural History has an informative article about the process of accessioning natural history specimens and how this can differ from cataloguing specimens). Specimens at the ANHC were almost all collected from the United States (only five were collected from Canada), and the collection includes specimens from 34 states. Almost 89 percent of the specimens were collected in Arkansas, and the second highest specimen count per US state in the ANHC collection was Missouri with 3.4 percent. 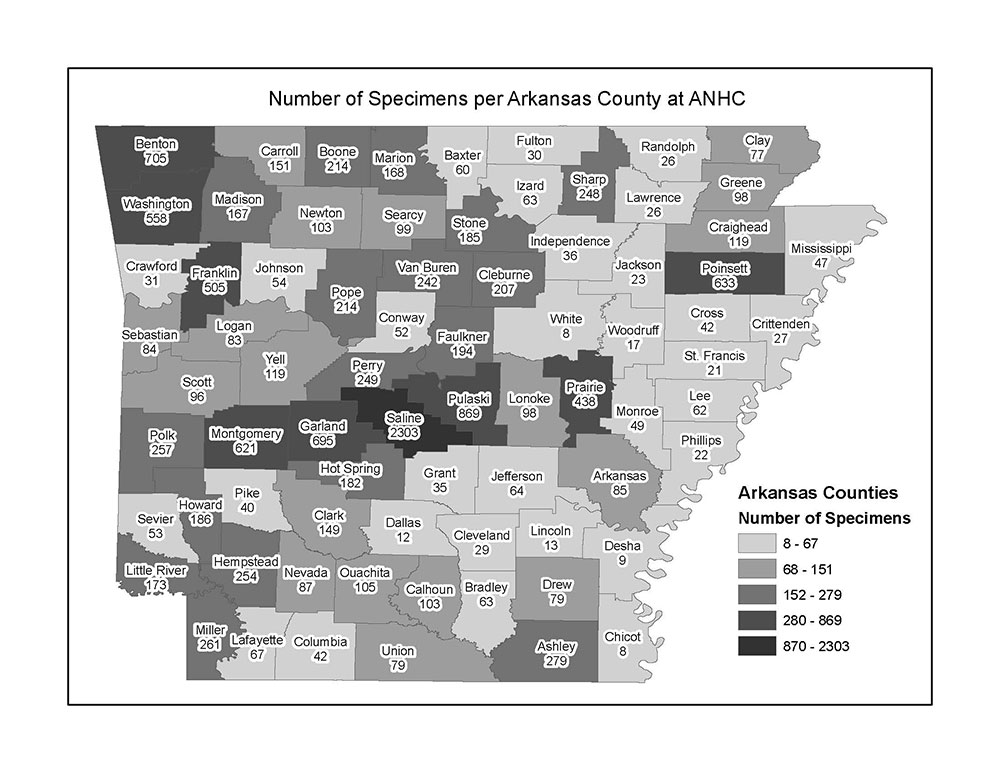 It’s no surprise that Saline County, the focus of ANHC Chief of Research/Herbarium Curator, Theo Witsell’s floristic survey for his master’s degree, has the highest number of specimens collected from Arkansas (16.5 percent). For reasons unknown to us, Chicot, Desha, and White counties each have fewer than 10 specimens collected.

The ANHC herbarium collection may be small, but it holds a great diversity of specimens. Of the accessioned specimens, 2,574 specimens (16.4 percent) represent vouchers of Arkansas plants of conservation concern. The collection contains over 3,288 total taxa, which includes species, subspecies, varieties, and hybrids. Only three families have more than 1,000 specimens; the families with the most specimens include: Cyperaceae (sedges) with 11.9 percent, Asteraceae (composites, the sunflower family) with 11.3 percent, and Poaceae (grasses) with 10.2 percent. There are 31 families with more than 100 specimens each, which can be seen in the graph below, organized by decreasing number of specimens by family from left to right.

The ANHC herbarium was founded by Theo Witsell in 2003. The oldest specimen in the ANHC collection was collected in 1941 and the most recent in 2019. About 90 percent of the herbarium specimens were collected this century. 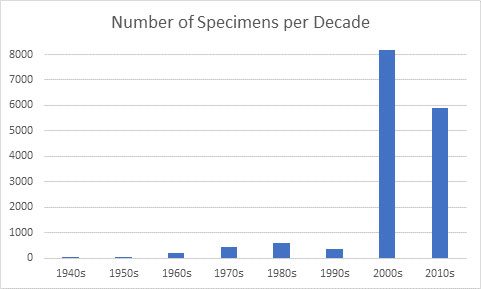 The ANHC continues to learn about our herbarium collection, especially as we work through our specimen backlog with the help of contractors and our amazing volunteer community.

Middle - Number of plant specimens per plant family with greater than 100 specimens in the ANHC Herbarium. Graph by Diana Soteropoulos.

Bottom - Number of specimens per decade collected in the ANHC Herbarium. Graph by Diana Soteropoulos.